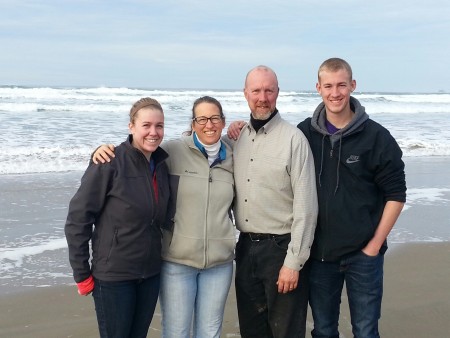 Wingham Farms is a young family farm (established 2013) owned and operated by some not-so-young farmers, Daniel Lee and Julie Sikkink Lee. We are focused on providing high-quality, environmentally sustainable, and ethically raised food for ourselves and our neighbors, and also have a special interest in helping people learn more about where their food comes from.

Daniel, the full-time farmer, grew up in southern England; his white-collar family resisted his interest in agriculture and other manual-labor work, but then took his whole family on camping holidays on farms every school break (to visit nearby historic buildings, but he was more interested in the critters and the tractors). That exposure first helped him see the interest and worth of farm-life up close, and he appreciates all the British farmers who patiently answered his many questions and let him watch their work. Daniel also learned how to milk cows as a teen on the dairy farm of family friends and helped out on that farm whenever he could. He raised bees and ducks in his back yard, and as a college student helped pay his way through school by working on a large arable farm in Wingham, Kent. His residence in Kent was the source of our farm’s name (although we also are making a quiet joke with ourselves, as we use to say that we would only be able to have a farm “when pigs can fly”). He has lots of mechanical sense and experience that comes from years of driving and repairing old motorcycles and Range Rovers (we own two, including a Classic from the first year they were imported to the US which was our original farm vehicle). His talents are coming in handy in managing our “vintage” collection of working farm machinery. Daniel has also learned how to butcher and is a supporter of the Portland Meat Collective, which helps people learn how to butcher and to use all parts of the animals they eat.  He’s also a fan and former board member of the Good Meat Project, working to spread Meat Collectives across the country.

Julie comes from a long line of farmers in the eastern Netherlands – and the last five generations in the US – although her father, who grew up milking cows by hand, moved just far enough away from farming to have a day job alongside the family’s 75-acre “hobby farm” (which still had lots of animals – especially sheep, chickens and pigs – as well as an enormous garden and orchard). She was a state and national officer of the Future Homemakers of America (now FCCLA) and an active 4-H member in school, so was always busy with a multitude of projects, particularly handmade clothing, but also gardening, cooking, caring for her horse, and raising guinea pigs and chickens.  She is grateful to her many mentors in those clubs, and especially her parents, for teaching her so many useful skills, showing her what people can do for themselves, and encouraging her initiative. Julie also works in Portland as a high-school English teacher during the school year, but takes the lead on the farm paperwork, developing and sharing recipes with customers, and handling much of the processing of our own food, from cheese-making to putting up vegetables, fruits and preserves.

As we learned more about healthy food and about the unethical and unsound treatment of animals and the land in commercial/factory farming (especially CAFOs), we wanted to raise our own dairy, meat and eggs as well as our own produce. We didn’t want to just read books like Michael Pollan’s Omnivore’s Dilemma; we wanted to act on our growing understanding. We also became increasingly concerned about all the barriers to consumer access to healthy food; not everyone can own a farm or even have the land for a garden, but we believe that everyone should have the knowledge about and access to the best possible food for their bodies and spirits (here’s one group we support that is working toward that goal: Growing Gardens).

The various factors necessary for buying the farm fell into place in the spring of 2013, just as our youngest child chose his college, so we are “empty nesters” with a VERY full nest. Our original 100 acres had been farmland ever since Oregon was settled by Europeans (it is actually the core of the original Manning farm for which our hamlet is named), but there has not been a family living on the property for many generations, and the land has been rented for crop (mostly hay) growing in that time. It needs healing and adaptation to a focus on low/no-till pasture agriculture.

Although we closed on the farm in late April 2013, there was a tenant farmer working the land that season and we could not begin active farm work until the late fall. We finally started getting some animals –flock-guardian dogs, our first 2 dairy cows and first 3 calves – in October of that year. We added young chicks later that fall and piglets in early spring. We have expanded to 140 acres (buying the house and land across the road) and are heading into our eighth summer of active farming. We now have 8 dairy cows, 4 heifers, an average of 8-10 beef steers, 8 pigs, a collection of ducks and geese, around 200 chickens, a number of barn cats, and 2 Maremmas – Italian flock-guardian dogs.  We also share our property now with Springwinds Farm, whose proprietor, Sarah, runs 12 dairy goats and about 20 kids on the property, while also working for us.  We are BUSY folks right now, just trying to keep up with the growing farm, and especially with building and repairing the fence lines to keep all the critters IN! But we enjoy that others can see our animals from the Banks-Vernonia Trail, and that our prospective and current customers have a chance to visit the farm and learn more about what we are doing, the science and philosophy that guides us, and the possibilities for partnership. We look forward to meeting you soon!

Want an update on things at the farm? Check us out on Facebook!